You are here: Home » Stomach Cancer

WHAT IS THE STOMACH? 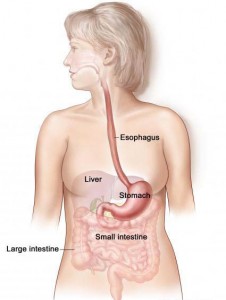 The stomach is a hollow, muscular organ sitting in the upper left part of the abdomen between the end of the oesophagus and the beginning of the small bowel
(small intestine). It stores food that has been swallowed and absorbs some  vitamins and minerals, including iron.
Acidic (gastric) juices are also released from glands in the mucosa of the stomach. These juices break food down into a thick fluid, which then moves into the small bowel. When the broken-down food is in the small bowel, nutrients from the food are absorbed into the bloodstream. The waste matter moves into the large bowel (large intestine), where it is stored until it is passed out of the body as a bowel movement.

Many people diagnosed with cancer want to know what caused the disease. The exact cause of stomach cancers are not known, but some factors may increase your risk. These include a history of smoking, drinking too much alcohol, being overweight or bese, being over age 50, and being male.

Other risks for stomach cancer include:

Having one or more of these risk factors does not mean
you will get stomach cancer. However, these
factors are often seen in people with these cancers.

Symptoms of stomach cancer may include:

• difficulty swallowing (dysphagia) or painful swallowing (odynophagia)
• pain behind the breastbone and/or heartburn (reflux)
• vomiting of saliva, food or blood
• hoarseness or coughing.

Symptoms of stomach cancers are common to many other conditions. If you have any of these symptoms and they are ongoing, see your doctor for a check-up.

In their early stages, stomach cancers may not cause symptoms. This means that they are not usually diagnosed until the cancer is more advanced.

Early symptoms of stomach cancer may include:

• a painful or burning sensation in the abdomen
• indigestion (dyspepsia), frequent burping, heartburn or reflux.

Other symptoms can occur later, including:

• a sense of fullness, even after a small meal
• nausea and/or vomiting
• loss of appetite and/or weight loss
• swelling of the abdomen (ascites) or feeling bloated
• blood in vomit
• unexplained tiredness